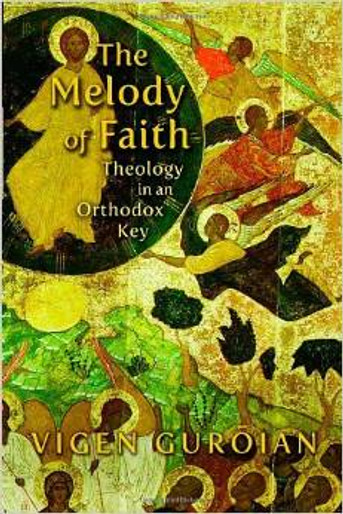 In the Orthodox Christian faith the elements of liturgy, scripture, hymnody, and iconography are the instruments or "voices" of a melody of faith. Here Vigen Guroian presents the fundamental beliefs of Orthodox Christianity through the metaphor of music. Often drawing on his personal religious experience, Guroian weaves together the themes of creation and new creation, beginning and end, sin and holiness, Incarnation and deification, sacrifice and salvation.

Guroian explores the dogmatic foundation of this rich faith in six chapters, or "movements." Through discussing Syrian, Armenian, Byzantine, and Russian iconography and Gospel illuminations- illustrated by icons and Armenian miniatures- he further reveals how Orthodox Christianity expresses theology as much in art as through language. As a whole, Guroian's Melody of Faith beautifully captures the spirit of Orthodox Christianity and takes readers to the theological heart of the Orthodox faith.

"In this lovely book Vigen Guroian sets forth the compelling beauty of Orthodox faith in its own right, on its own terms, as someone who loves the faith and lives it. At the end, the reader will have not just an idea of what Orthodoxy is but also a sense of what it is to participate in it. In the words of the Apostle John, come and see. Come and listen." -Frederica Mathewes-Green, author of Facing East: A Pilgrim's Journey into the Mysteries of Orthodoxy

"No one should presume that The Melody of Faith simply provides a better understanding of Orthodox theology, because it does much more. In this book Vigen Guroian helps the reader understand, see, and sing the Christian mysteries, for Creation is a Trinitarian love song that envelops us all." -Stanley Hauerwas, author of Hannah's Child: A Theologian's Memoir

Vigen Guroian is professor of religious studies in Orthodox Christianity at the University of Virginia, Charlottesville. His many other books include The Fragrance of God, Inheriting Paradise, and Tending the Heart of Virtue.

Illness and Healing in Orthodox Theology

The Making of the New Testament

The Mystery of Marriage - A Fellowship of Love