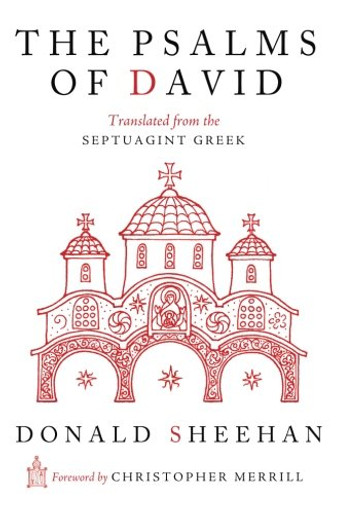 Professor Sheehan's brief introductory exposition of the Davidic roots of Psalms and the poetics of chiasmus guides us in understanding how the ruining oppositions of actual experience are held in Psalms within the musical disciplines of lyric art: held, until God Himself can be seen in the ruins: seen, and felt, and overwhelmingly and gratefully loved. The psalmist's world doesn't change as he turns his experience toward God. What changes is he himself. How he changes is toward acquiring the very mind of Christ, to which each of us is called.

"In this rendering, the Psalms become once again what they were for Christian believers from the very beginning: the hymnal of the Church. They remain, certainly, the songs of Israel: from its cries of lamentation to its shouts of exultation. But for the Christian reader, they become as well hymns of petition and praise that express both the joy and the longing of those who live 'in Christ' . . . At the same time their very language can convey to us the assurance that, as he has throughout the millennia, God hears our prayer and responds to it with boundless mercy, love, and compassion."--From the Preface by Fr. John Breck
Donald Sheehan began his long teaching career at the University of Chicago and concluded it at Dartmouth College. He served for twenty-seven years as the Director of the Frost Place in Franconia, New Hampshire, where he created internationally acclaimed writing programs and inspired many contemporary poets. Becoming an Orthodox Christian in 1984, he studied, prayed, taught, and wrote about Psalms until his repose in 2010.

Psalm Verses of the Orthodox Liturgy