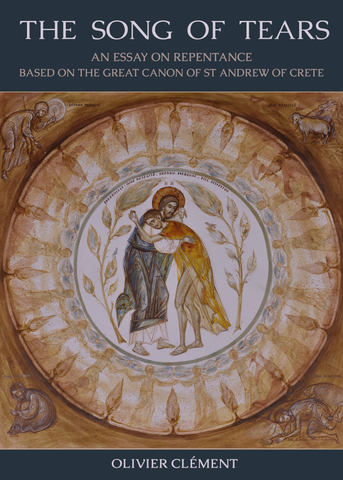 The Great Canon has been described as one of the jewels of Orthodoxy’s ascetic spirituality. In the first week of Lent, during Great Compline, it is sung and declaimed in portions; on Thursday of the fifth week, during Matins, in its entirety. Throughout, accompanied by bows or prostrations, the refrain is: Have mercy on me, O God, have mercy on me.This short, yet full, essay by Olivier Clément serves as an enriching commentary and guide for reading The Great Canon of St Andrew of Crete. The author begins the journey with a study of the meaning of “awakening” and “the fear of God”: the stepping stones toward true repentance. He then follows the Canon’s path of identifying our fallen nature, the passions, Christ's liberation from sin and death, humility, and asceticism, and ends with a comparison between the shedding of tears and the holy chrism of baptism. Clément ultimately encourages us to see repentance as the key to being fully alive—and The Great Canon as our roadmap toward becoming alive in Christ.  A translation of the Great Canon accompanies the text.

"A remarkable interpretation of the Bible unfolds throughout the Great Canon.... Originally the Great Fast was a preparation for Christian initiation, the death-and-resurrection with Christ that was conferred during the Paschal night. Each day... the bishop would give a biblical catechesis in which the literal and spiritual meaning fitted each other, and in which the entire Bible was interpreted as being the encounter of the two Adams, as one vast parable of the Prodigal Son. These efforts to understand were inseparable from a committed asceticism—as they still should be—for one must approach Scripture with an intelligence that is purified, heart and mind united. Traces of this primitive catechesis survive in the hymnography of the Triodion, particularly in Saint Andrew’s Great Canon. Eight of its nine odes consist, in the main, of a 'metanoic' [i.e., repentant] rumination on the Old Testament, with the grace of the life-giving Cross appearing not just in the typology but directly in the final troparia of each ode before coming into its own in the ninth, which is entirely devoted to it. In this way, the Bible becomes the story of humanity, the story of the 'total Adam,' of the 'single Man,' as the Fathers put it, and consequently of my story. Not in the sense that I should turn the Bible into a game of pietistic allegories so as to express the various states of my soul. Rather, in the sense that I am wrested from my smug or dreary individuality and discover that I am “consubstantial” with the heart-rending experience of all men.... [O]ur fallen state is not something closed in on itself. Despair turns into hope. Someone has descended into our hell to make light shine in it." —Olivier Clément