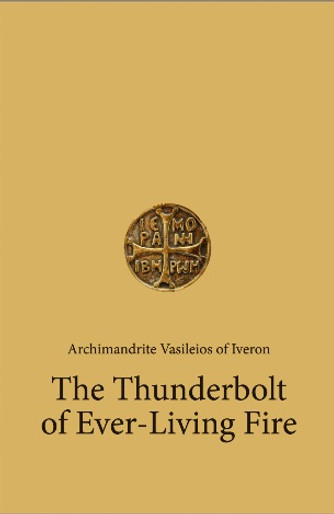 The present book consists of Elder Vaileios' talks, discussions and dialogues in various venues mostly in the United States during his visit in 2011, along with excerpts from his writings selected to complement the themes of his talks.  The themes dealt with by Fr. Vasileios so eloquently in this book are extraordinarily wide-ranging; he handles complex and difficult issues in theology, spirituality, liturgics, parish life and monasticism with amazing clarity and insight.  He quotes with equal facility from figures as diverse as Heraclitus, Dostoevsky, St. Isacc the Syrian, St. Maximus the Confessor, Stefan Zweig, Andrei Tarkovsky, Vladimir Lossy, Georges Florovsky and St. Nicholas Cabasilas.  Above all, there is an exhilarating sense of freedom and innocence in his thought.  It is the freedom and innocence of profound faith and spiritual knowledge and childlike simplicity.  HIs wisnow is expressed via the "hyperlogic" of a hesychastic spriti, which makes for surprising connections and illuminating insights.  The appearance of this new book by Archimandrite Vaileios is truly a cuase for celebration.

Archimandrite Vasileios Gontikakis is one of the greatest living elders (geron/elder: spiritual father and guide of souls) in the Orthodox Church today. He would certainly be uncomfortable with that kind of praise, and would demur that he is nothing but a bundle of human weaknesses and would point to God as the all-powerful, infinitely loving and merciful source of all good. Nevertheless his achievements and influence during the last 45 years have made a huge impact on the life of the Church. In 1968, as a theologically educated archimandrite, he took over the recently abandoned monastery of Stavronikita on Mount Athos with a group of young monks and thus became a pioneer in the astonishing revival of monasticism on the Holy Mountain that has taken place in the last 40 years. After 22 years as abbot of Stavronikita, he moved ot the neighboring monastery of Iveron where as abbot he reintroduced the cenobitic life and transformed that monastery as well with his spiritually invigorating commitment to stillness (hesychia) and watchfulness (nepsis). His writings, many of which are lectures and talks given at conferences around the world, as well as two highly regarded books, Hymn of Entry and Hymn of Dismissal, have spread the message of Orthodox liturgical and hesychastic spirituality far and wide. Now retired and living in reclusion, he devotes his life to prayer and contemplation on the Holy Mountain.