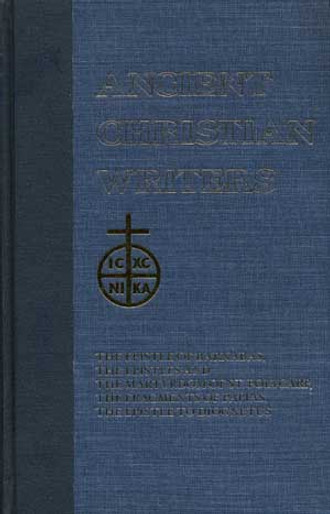 The Works of the Fathers in Translation:

The Didache or The Teaching of the Twelve Apostles, probably written before the end of the first century, purports to be an instruction based on sayings of the Lord and given by the Twelve Apostles to pagans who wished to become Christians. The Epistle of Barnabas is a homily on the mistaken Judaistic conception of the Old Testament. The Epistles consist of a covering note and a letter, which is an exhortation to the Philippians on Christian life in general. The Martyrdom of St. Polycarp is the story of this bishop of Smyrna's death at the hand of the Roman authorities in Asia for the defense of the Christian faith. The Fragments of Papias. Papias, bishop of Hierapolis in Asia Minor, was the author of five books, entitled Exegesis of the Lord's Gospel. The Epistle to Diognetus is an apology for Christianity, presented by an unknown writer to a pagan of high social or political rank.

Theodoret of Cyrus: Commentary on The Letters of St. Paul, Vol 1

Gregory of Nyssa: The Life of Moses

Theodoret of Cyrus: Commentary on The Letters of St. Paul, Vol 2