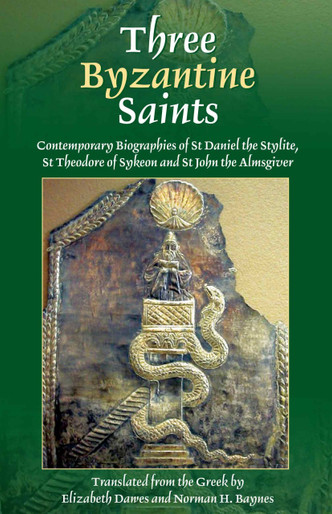 These Byzantine biographies of St Daniel the Stylite, St Theodore of Sykeon, and St John the Almsgiver help us to enter into the Byzantine ascetic thought world, with its miracles, its feeling of the nearness of saints and demons, its contempt for the body, and its longing for the peace of the soul. They also give us a vivid picture of life in Asia Minor before the Arab invasions, and are in many ways documents concerning the social history of Byzantium.

The introduction and bibliographical notes of Dr Norman Baynes are a mine of information and are matched by the excellence of the translations of the lives by Dr Elizabeth Dawes, who captures the widely divergent aspects of Byzantine piety.

John the Almsgiver was Patriarch of Alexandria in a time of crisis during the early years of the seventh century; Theodore the Sykeote represents life among the peasantry of Anatolia at the end of the sixth century; Daniel the pillar saint, who died in 493 AD, challenged many to seek a more disciplined theological and spiritual life through his strange form of asceticism.

Other books by St Vladimir's Seminary Press which serve to illumine the spiritual world of the Byzantine Saints are: The Desert a City by Derwas Chitty and St Gregory Palamas and Orthodox Spirituality by John Meyendorff.

Saint Sophia and Her Three Daughters, Paterikon for Kids 48

This Is My Beloved Son: The Transfiguration of Christ