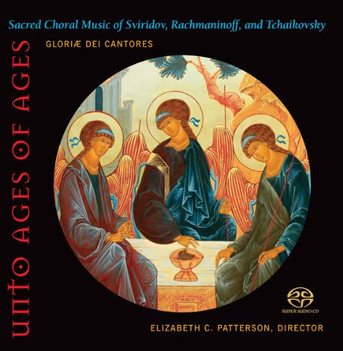 Gloriæ Dei Cantores first recording in Super Audio CD featuring the North American recorded premiere of Georgy Sviridov's Ineffable Mystery, a gorgeous sacred choral suite. In his memory, the choir sang this set of pieces in Moscow and the Golden Ring on their third tour of Russia in 1998. Georgy Sviridov,who was one of Shostakovich's favorite students, wrote the music for Moscow's leading television news program and became one of the leading composers during the Soviet regime. His vocal music has been championed by Dmitri Hvorostovsky, the great Russian baritone. Gloriæ Dei Cantores, having already recorded "the best anthology of Russian music" (American Record Guide for Sacred Songs of Russia), now adds this rich collection of Russian sacred music to their discography. Also included are excerpts from the Tchaikovsky's Liturgy of St. John Chrysostom and the Rachmaninoff All-Night Vigil. These three composers and their works form a CD not to be missed by choral and Russian music fans.

Word of the Cross, The (CD)