Chosen for His People - A Biography of Patriarch Tikhon 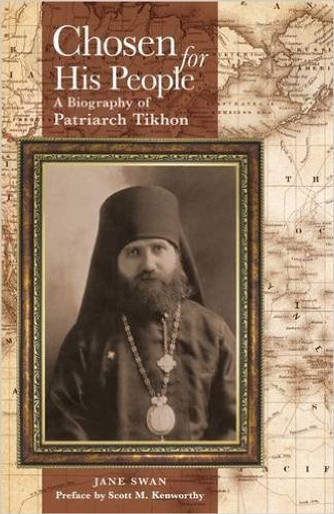 Chosen for His People - A Biography of Patriarch Tikhon

St Tikhon, Patriarch of Moscow (Vasily Ivanovich Bellavin, 1865-1925) is one of the most important figures of both Russian and Orthodox Church history in the twentieth century. Yet ninety years after his death this remains the only complete biography ever published in the English language. It has now been updated and revised with a new preface and bibliography, together with revised and additional endnotes, by Scott M. Kenworthy.

All together these reveal a picture of a man whom no one expected to be chosen as Patriarch. Nevertheless he humbly accepted the call of God and the people to guide the Church during the most turbulent of times as it faced both internal upheavals and external persecution. As he said in his speech immediately following his election as Patriarch in 1917, “…I am entrusted with the care for all the Russian churches, and what awaits me is the gradual dying for them all my days.”

Both specialists and general readers will become better acquainted with St Tikhon through this modest but carefully crafted monograph.

Dr. Jane Swan (1925-2010) taught history at West Chester University in Pennsylvania and served as Director of the Women's Center there. She earned her doctorate in Russian history from the University of Pennsylvania.

Dr. Scott M. Kenworthy is Associate Professor of Comparative Religion at Miami University in Onio. He earned his doctorate in history from Brandeis University and was the recipient of the 2010 Frank S. and Elizabeth D. Brewer Prize of the American Society of Church History for his first book (The Heart of Russia: Trinity-Sergius, Monasticism, and Society after 1825 (Oxford University Press, 2010).

Patriarch Kirill in His Own Words (Russian)

Challenge of Our Past, The

Christ, Our Way and Our Life

Catholicity and the Church