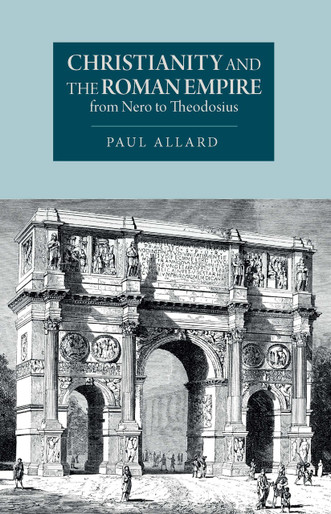 In this classic work Paul Allard asks, “Why did the Christians suffer two and a half centuries of suspicion and official repression?”

Several emperors persecuted the Christians: Nero, Domitian, Marcus Aurelius, Sulpicius Severus, Decius, Valerian, and especially Diocletian, who unleashed “the great persecution” from 303 to 312. Diocletian’s Persecution Edict stated that all churches throughout the empire were to be destroyed and all sacred books burned. Many Christians lost their social rank and privileges, while Christian slaves could not be freed. In some places, the Christians were tortured, beheaded, exiled, or sent to the beasts. But the Church found defenders in the second century apologists, such as Justin Martyr, Athenagoras, Theophilus of Antioch, and Tertullian, who argued that the persecutions were illegal and unjust. Tertullian’s statement became axiomatic: “the blood of the martyrs is the seed of Christians.”

When Constantine converted from “sun worship” to Christianity in 310, he prepared the ground for the Byzantine state. Christianity was recognized as a lawful religion in 313. But much more lay in store for the early Church, including the tumultuous years of Emperor Julian, who sought to return the empire to the worship of the old gods, and initiated repressive measures against Christians. Only in 380 did Theodosius I make Christianity the official religion of the Roman Empire.

The history of the persecutions reminds us that the spread of Christianity took place against considerable opposition. In our own day, Christians face another kind of test in a world that is increasingly secularized. Allard’s book offers timely reminders of how early Christians maintained their identity as a minority in the midst of official suspicion.

Christianity in India, From Beginnings ot the Present