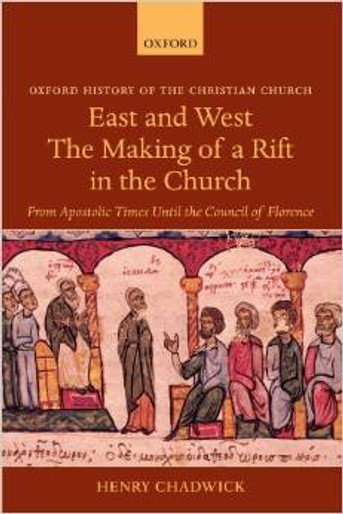 The greatest Christian split of all has been that between east and west, between Roman Catholic and Eastern Orthodox, a rift that is still apparent today. Henry CHadwick provides a compelling and blaanced account of the emergence of divisions between Rome and Constantinople. Drawing on his encyclopaedic command of the literature, he starts with the roots of divergence in apostolic times and takes the story right up to the Council of Florence in the fifteenth century.

Henry Chadwick's own years of experience as an ecumenist inform his discussion of Christians in relation to each other, to Jews, and to non-Christian Gentiles. He displays a distinctive concern for the factors- theological, personal, political, and cultural- that caused division in the church and prevented reconciliation. His masterly exposition of the complex issues discussed at the Ecumenical Councils (issues that eventually led to the separation) is characteristically clear and fair. This is a work of immense learning, written with sensitivity and spirit. Its fascinating detail and full analysis make it invaluable to anyone interested in how this lasting rift in the Church developed.

Henry Chadwick is Emeritus Regius Professor of Divinity at the University of Cambridge.