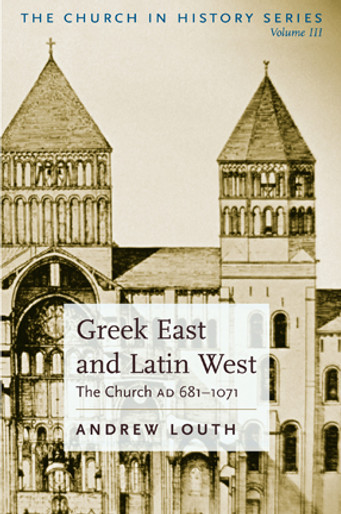 This volume gives an account of the Church in the period from the end of the Sixth Ecumenical Synod in 681 to the Battle of Manzikert in 1071. Although "Greek East" and "Latin West" are becoming distinct entities during this expanse of time, the author treats them in parallel, observing the points at which their destinies coincide or conflict. The author notes developments within the whole of the Church rather than striving simply, or even primarily, to explain the eventual schism between Eastern and Western Christendom.

Covering events both unique to each part (the Iconoclastic controversy in the East and the rise of the Carolingian Empire in the West) and common to each part (monastic reform, renaissance, and mission) the author skillfully portrays two Christian civilizations that share much in common yet become increasingly incomprehensible to one another. Despite curious synchronisms between East and West, the author demonstrates how two paths diverged from a once common route, and how eventually Byzantine Orthodoxy defined the Greek East over and against the Latin West in theological, religious, cultural, and political terms.

About the Author: Rev Dr Andrew Louth is the general editor of The Church in History series and has authored several books in his discipline. Fr Louth also is professor of patristic and Byzantine studies at Durham University.

THE CHURCH IN HISTORY SERIES of St Vladimir's Seminary Press balances the approaches of the abundance of church histories written from a Western Christian point of view. Series authors are in the unique position of being Orthodox scholars conversant with Western scholarship and have taken on the task of analyzing complicated primary sources and thoroughly critiquing modern scholarly literature to guide readers through the maze of centuries of church formation and life.