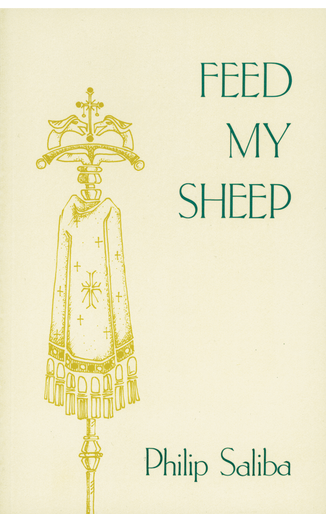 For more than two decades Philip Saliba, Metropolitan and Archbishop of the Antiochian Archdiocese of North America, was one of the most prominent hierarchs in American Orthodoxy. Though he has been the subject of countless articles and interviews in various publications, people still do not know the private person behind the public figure.

This book is neither a biography nor an evaluation of Metropolitan Philip's episcopate, but rather a revelation of the man through his speeches and writings. In these pages we see him as the vigilant shepherd of his flock and a loving father to his priests, but some may be surprised to learn that Philip went through a period of doubt and inner turmoil following his graduation from seminary in 1948. He emerged from his struggle deeply and firmly committed to the Orthodox faith and ready to serve the Church as priest and later as bishop. We gain great insights into the personality of Metropolitan Philip in his 1966 Consecration Address, printed for the first time in English. When he speaks of his heart trouble and surgery, his faith and trust in God are readily apparent. He shows his humility and awe at the Incarnation and Resurrection of Christ in his personal Meditations on Christmas and Pascha, and his words cause us to marvel at the great mystery of God's love for mankind.

Metropolitan Philip was devoted to the ideal of Orthodox unity of America. His frank comments on this matter reveal an impatience and disappointment at the lack of commitment on the part of other Orthodox bishops who did not share his vision. Close to his heart were the young people of the Church. They are the Church's greatest potential assets, and Metropolitan Philip was anxious for them to grow in faith and love.

Father Joseph Allen, in choosing the words of Metropolitan Philip, has painted a portrait of a warm and gentle man who took seriously his responsibilities for the flock entrusted to him by God. Christians everywhere will welcome this opportunity to see a true shepherd using his wisdom and spiritual gifts to feed his sheep.

My First Book About Baptism and Chrismation - My First Series #7