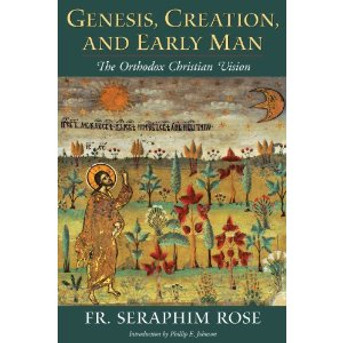 Amidst the creation/evolution debate that is now raging, with evidence being offered for both sides, few have made use of what Fr. Seraphim Rose called "the missing evidence": the timeless teaching of the Orthodox Holy Fathers on the events of creation, the first-created world, the natures of created things, the original nature of man, and the cosmic consequences of man's fall.

In the present volume, this teaching has been gathered and set forth in a thorough, detailed, and above all honest manner. Perhaps more than anyone else in our times, Fr. Seraphim Rose searched, studied, prayed, and struggled to understand how the Holy Fathers noetically apprehended the beginning of the world as revealed in the Divinely inspired book of Genesis. Having acquired their mind, he has presented to the modern world the harmonious Patristic vision of the cosmos.

A much-needed answer to today's "crisis of meaning," this book sheds unique light on the origin and primordial condition of man and the cosmos, showing how these mysteries are inextricably tied to those of our redemption by Jesus Christ and of creation's redeemed state beyond the general resurrection. The Divine vision of the Fathers opens up deeper levels of awareness concerning GOd's creation and His ultimate intention for it- levels that cannot be reached through merely rational or scientific means.

Fr. Seraphim Rose (1934-1982) was an Orthodox monk in the ancient tradition who dedicated his life ot reawakening the modern West to forgotten spiritual truths. From his remote cabin in the mountains of northern California, he authored works tha that have had a profound international impact.

"A presentation of the traditional, Patristic understanding of Genesis, which at the same time bravely exposes the lie of the modern philosophy of evolution. This is a vital, pathfinding work, which can serve as a true foundation for all sides in future discussions." -Metropolitan Joseph, Bulgarian Eastern Orthodox Diocese ofthe USA, Canada, & Australia