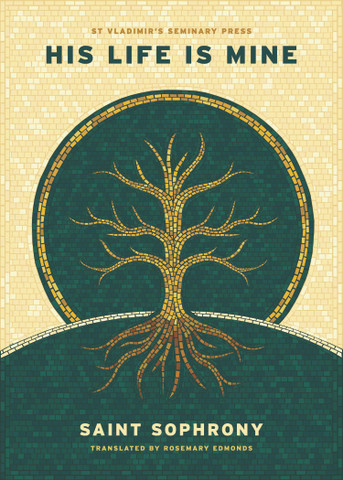 This is a new edition of His Life Is Mine revised with a new cover to reflect the canonization of the author to sainthood.

Contemplation, prayer, spirituality--these words have become popular in our day among those despairing at the banality and emptiness of the contemporary scene. But popular as well are a myriad of pseudo-spiritualities, each offering its own shortcut to spiritual satisfaction. His Life is Mine is a refreshing contrast. The book deals with prayers, and especially with the "Jesus Prayer" of Orthodox monasticism. Yet it is not simply a presentation of "techniques." The book is permeated by the awareness that prayer is not just the cultivation of a particular spiritual state, not the investigation of an abstract Idea or dissolution in an anonymous Whole, but an encounter with the personal Being, I AM, demanding in turn our own growth in person-hood.

As remarkable as the book is the life of its author, Saint Sophrony. Like a good plot, his life proceeded from possibility to probability to necessity -- from marked success as a painter exhibiting in the great Paris salons after the Russian Revolution then to a brief period of study at the Orthodox Theological Institute in Paris to Mount Athos, the Holy Mountain of Eastern monasticism. On Mount Athos he spent twenty-two years, first as a monk in the Russian Monastery of St Panteleimon and for the final seven years as a hermit in the "desert."

Also by Saint Sophrony, and published by St Vladimir's Seminary Press, are Wisdom from Mount Athos, On Prayer, and St Silouan the Athonite.

I Love Therefore I Am