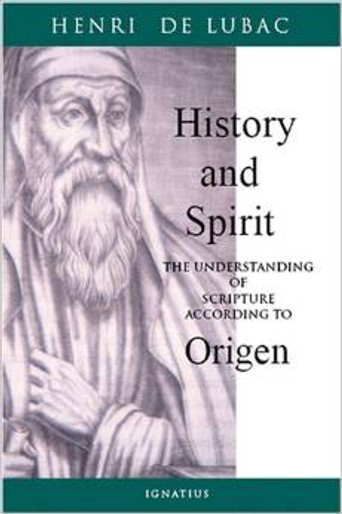 Origin (185- ca.254), one of the most prolific and influential of the early Church Fathers, is best known to us for his exegesis of Scripture. Henri de Lubac's History and Spirit is a landmark study of Origin's understanding of Scripture and his exegetical methods. In exploring Origin's efforts to interpret the four different senses of Scripture, de Lubac leads the reader through an immense and varied work to its center: Christ the Word.

Hans Urs von Balthasar said in discussing this seminal work: "The theory of the senses of Scripture is not a curiosity of the history of theology but an instrument for seeking out the most profound articulations of salvation history... When exegesis is understood in this way, it includes all of theology, from its historical foundation to its most spiritual summits. In the center stands Christ, who is both exegete and exegesis; he interprets himself and does so primarily in deeds, which are incarnate words. Thus the letter is always being transformed into spirit, promise into fulfillment..." -from the book The Theology of Henri de Lubac

What the reader finds on this journey, then is not only a fascinating view of the  mind and spirit of an important Father of the Church, but an essential key to a more profound understanding of the way in which Christ speaks to us through Scripture.

"Anyone desiring to understand Sacred Scripture as the Spirit-inspired Word of God, which is proclaimed and which animates the worship of the Church, must read this masterful presentation of Origin's literal and spiritual exegesis. Henri de Lubac pioneered the re-discovery of patristic spiritual exegesis." -Fr. Matthew Lamb, Ave Maria University

Henri de Lubac, S.J. was considered one of the most important theologians of the twentieth century. Together with Joseph Ratzinger (now Pope Benedict XVI) and Hans Urs von Balthasar, the writings of de Lubac stand out as some of the most crucial theological works of the twentieth-century Catholicism. His numerous works include Catholicism, The Splendor of the Church, the Drama of Athiest Hummanism, and The Motherhood of the Church.

Holy Emperor Constantine and the Edict of Milan, 313-2013

Holiness - Is It Attainable Today?