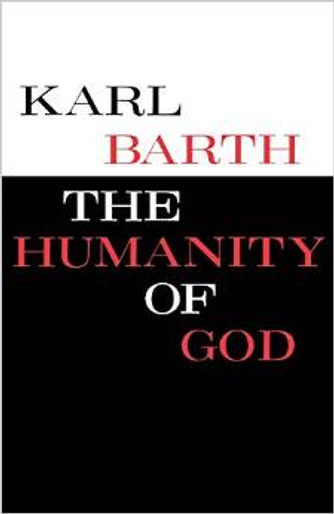 The Humanity of God, by theologian Karl Barth (better known for his work Church Dogmatics), consists of three essays: "The Humanity of God," "The Gift of Freedom," and "Evangelical Theology in the 19th Century." All of the essays contain a concise and recent treatment of some of the central issues in Barth's theology, and they show how Barth's later work moved beyond his revolt against the dominant liberal theology in the first decades of this century. In the essay "The Hunanity of God" he lay sthe cornerstone for his new evangelical theology by stating that the deity of God, rightly understood, includes His humanity. This is the irrefutable good news of God's acceptance of humankind through Christ.

In "Evangelical Theology in the 19th Century" Barth examines the theology of liberalism against which he and his theological colleagues reacted.

The last essay, "The Gift of Freedom," deals with practical problems of the Christian life. Barth finds the basis of evangelical ethics in the overwhelming fact that God has made the human creature free and a partner in His work.

Truly Human: Recovering Your Humanity in a Broken World

I Know a Man in Christ: Elder Sophrony the Hesychast and Theologian

Hymn of Dismissal: "Now All Things are Filled with Light"

How Our Departed Ones Live: The Experience of the Orthodox Church

Honey - Blessed at the Hermitage of the Holy Cross, 1 Pt.