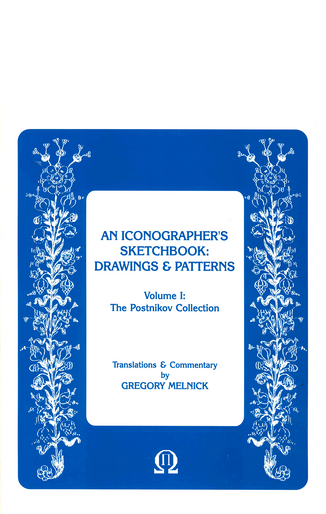 This book is one I wish I had thirty years ago. Then, it was difficult to find suitable patterns and models for icons. Here (with Volumes I and II) are almost 400 tracings of antique icons that are not the 'classics' found in all albums of Russian icons, but rather represent iconography as it was known at the end of the nineteenth century when there was a 'return to basics.' At the beginning of the twentieth century, people did not know what classic Russian icons looked like. Genuine icons were not accessible since old icons were painted over or were locked away in royal churches and chapels. Many icons were covered with elaborate jeweled covers revealing only the faces and hands. These current volumes contain patterns which have been completely redone, “translated,” if you will, to make them more useful. The originals were printed in reverse, without test or explanations, apart from the Russian Titles. Explanations and commentary have been added.

These drawings are not designed for icons. Rather, the Sketchbooks present an “idea” as “studio” books. They should be used with other resources, including the classic pattern books previously published (e.g. An Iconographer’s Patternbook; An Icon Painter’s Notebook; The Painter’s Manual of Dionysius of Fourna) and other texts such as The Meaning of Icons; Icon: Image of the Invisible; The Icon: Window on the Kingdom, and other readings. Most of the “model” saints, St Blaise for example, are represented in this set and hopefully will be useful. I sincerely hope that this new edition of Postnikov and Tyulin collections will be an inspiration to my fellow icon painters and aid the painting of modern traditional orthodox icons. – Gregory Melnick, the author

Techniques of Icon and Wall Painting