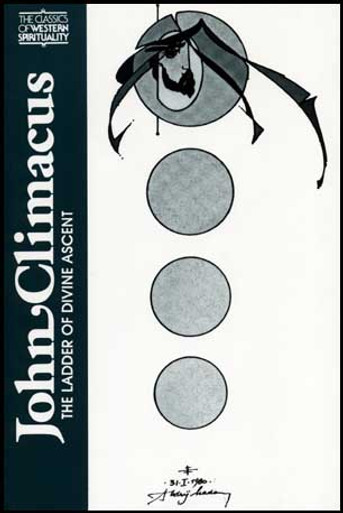 "Prayer is the mother and daughter of tears. It is an expiation of sin, a bridge across temptation, a bulwark against affliction. It wipes out conflict, is the work of angels, and is the nourishment of everything spiritual." -John Climacus (c.579-649)

The Ladder of Divine Ascent was the most widely used handbook of the ascetic life in the ancient Greek Church. Popular among both lay and monastics, it was translated into Latin, Syriac, Arabic, Armenian, Old Slavonic, and many modern languages. It was written while the author (who received his surname from this book) was abbot of the monastery of Catherine on Mount Sinai. As reflected in the title, the ascetical life is portrayed as a ladder which each aspirant must ascend, each step being a virtue to be acquired, or a vise to be surrendered. Its thirty steps reflect influence in the development of Christian monasticism generally, and particularly the Hesychastic, Jesus Prayer, or Prayer of the Heart movement. Pierre Pourrat in his History of Christian Spirituality calls John Climacus the "most important ascetical theologian of the East, at this epoch, who enjoyed a great reputation and exercised an important influence on future centuries."

Three Treatises on the Divine Images: St. John of Damascus