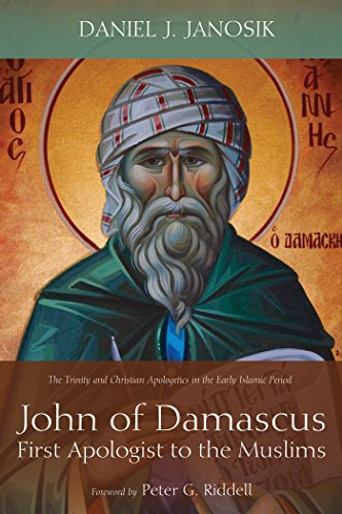 Much of the world today is convulsed in an epic struggle between the Christian West and Islam. Scholars seeking to understand the issues look back in history to unearth the roots of this conflict. Of great value in this effort are the writings of an eyewitness, a devoted Christian who served as chief financial officer of the Umayyad Empire and wrote at the time Islam was developing. John of Damascus (675-750) authored two major works, the Heresy of the Ishmaelites and the Disputation between a Christian and a Saracen, to provide an apologetic response to Islam from a Christian perspective. His writings shed light on many questions that are pertinent today: When was the Qur'an actually written? What was the role of the powerful caliph Abd al-Malik in the making of Muhammad? How did the theological issues related to the deity of Christ and the Trinity develop in the early days of Islam? This book delves into the life of John and studies his apologetic writings in detail, utilizing the first English translation from the critical text. It seeks to address these questions thoughtfully, provide valuable insights from the past, and then equip today's church as it engages with Islam.

"In this age of ignorance of Islam, Dr. Daniel Janosik has introduced us to one of the most significant Christian thinkers of the eighth century, one who provides us with a real window on early Islam. Dr. Janosik's book is highly relevant to our age, well written, and accessible even to the uninitiated. This is a critical book, not just for patristics but for understanding our present circumstance."
--David Cashin, Professor, Intercultural and Muslim Studies, Columbia International University

"The last twenty years have been a wake-up call for many in the West, not least in terms of the relation of Islam to the modern world. With helpful insight from one of the earliest witnesses to the rise of Islam and the significant theological differences between the historic view of God found in orthodox Christianity and the new movement emerging which we now know as Islam, Daniel Janosik's book is a valuable historical tool to help lead us into the substance of the core issues of what is at stake in the debates over sources, substance, and truth claims in regard to the view of God. John of Damascus saw firsthand the advance of this new movement and engaged in public service under the conquerors even as he also wrestled with the ideas and claims being made by this new faith. He saw it as a significant challenge to Christianity and engaged with the earliest claims and ideas and provided a thoughtful Christian response. His work sheds important light on early Islam, the formation of its beliefs and not merely on what was present but what was missing in this early period. Daniel's work will be an important resource for those interested both in history and in theology as it carefully delineates important issues on both these fronts which have bearing on contemporary interactions with Muslims. John of Damascus deserves more attention and this book provides a timely resource on a neglected voice. I highly recommend it."
--Stuart McAllister, Global Support Specialist, Ravi Zacharias International Ministries

"One of the key issues of the twenty-first century has been the relations between Islam and the West. In that context it is helpful to look back at the first major Christian theologian to engage with Islam, the last of the Eastern Church Fathers, John of Damascus. Daniel Janosik gives us a fascinating and illuminating guide to John's approach. Definitely to be commended."
--Tony Lane, Professor of Historical Theology, London School of Theology

Daniel Janosik is an adjunct professor of apologetics, historical theology, and Islamic studies at Southern Evangelical Seminary, as well as Columbia International University. He is the author of A Christian's Guide to Islam.