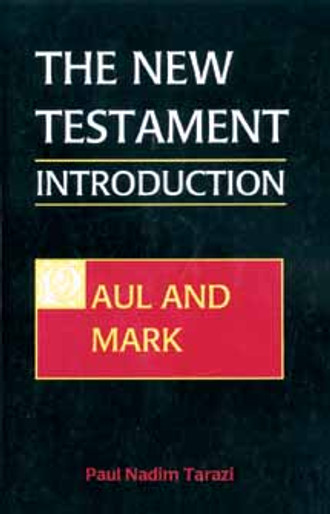 This is the first of a four-volume New Testament Introduction series by Fr Tarazi, which presents never-before published results of the author's own research. Here we find the kind of perceptive exegesis of St Paul's epistles we would expect from the author of the groundbreaking commentaries on I Thessalonians and Galatians. But we also find the unexpected: a completely new thesis about the original purpose of Mark's Gospel, followed by a commentary that defends the thesis by showing how each part of the second Gospel was designed to serve that purpose.

Fr Tarazi explains how the very concept of a New Testament "scripture" came into being, beginning with Paul's letters. Paul's death then left a void in the leadership of Gentile Christianity, which was still under attack by Jewish Christianity. In order to defend the faith as it was preached by Paul, some of his followers created what is now the Gospel of Mark. Their purpose was not to make a historical chronicle of Jesus' life or a systematic presentation of Christian doctrine, but rather to defend Paul's conception of Christianity from the remaining (Jewish) apostles. In writing the story of Jesus, they interpreted Jesus himself and the events of his life according to what they knew of the teaching s and life story of their own leader Paul.

The remaining volumes in this series will cover Luke and Acts in Volume II, John and Revelation in Volume III.