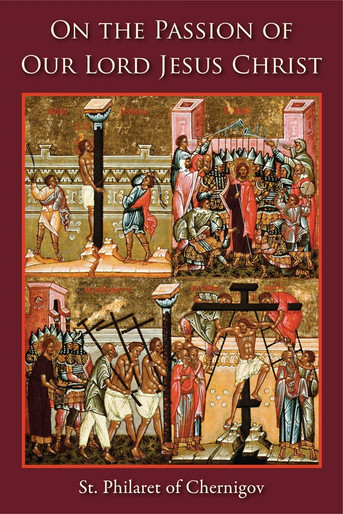 Over the centuries Orthodox Christians have utilized the time of Great Lent to contemplate the salvific Passion of our Lord and Savior Jesus Christ—the voluntary sufferings which He undertook out of love for mankind, in order to make possible our return from our fallen state to full communion with God. On the Passion of Our Lord Jesus Christ by St. Philaret of Chernigov is a grace-filled aid in this contemplation. Originally preached in Russian churches during Great Lent, these sixty inspired sermons are permeated with a spirit of sincere love for Christ and awe before His sacrifice for mankind. Chronologically tracing the period of the last four days of the Savior’s earthly life, they take the reader through every aspect of His Passion, providing Christians with fertile material for soul-benefiting meditation on Christ’s final teachings, sufferings, and death on the Cross.

In this English edition, a moving homily by St. Philaret on Christ’s Resurrection follows the discourses on the Passion.

St. Philaret (Gumilevsky), Archbishop of Chernigov (1805–1866), was a fervent and effective pastor of Christ’s flock, as well as a prolific Church writer. Born in a small village in Russia, he was the son of the village priest, himself a notable pastor and preacher. As a young man, he was blessed by St. Seraphim of Sarov, who said that he would “be glorified throughout Russia as a learned man.” He was a close disciple of St. Philaret (Drozdov), metropolitan of Moscow, the great Russian theologian. Consecrated to the episcopacy in 1841, he was first assigned to the cathedra of Riga, Latvia, where, thanks to his pastoral zeal, over 100,000 souls were joined to the Orthodox Church. He was later transferred to the Russian diocese of Kharkov, and then to Chernigov, where he reposed. His literary works include historical, theological, and homiletic books, as well as numerous articles. The present book was first published in Russia in 1858.

Christ, Our Way and Our Life