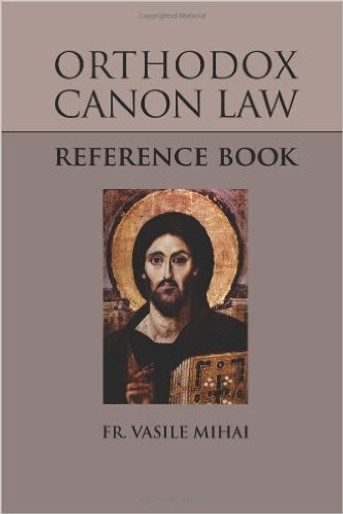 In one manageable volume, Orthodox Canon Law Reference Book makes the canons of the Orthodox Church, which were written and compiled over centuries, searchable and accessible to current inquirers. In his preface, Fr. Mihai explains the place of canons in relation to revealed faith and the personal experience of God's presence. A most valuable introduction distinguishes between Canon Law and secular law, and not only discusses how to interpret canons, but also offers several examples demonstrating the interpretive process of analysis and application. Alphabetized topics organize the pertinent canons, which are then listed chronologically under each topic. Numerous footnotes offer explanations for terms and understandings from historical contexts. Three appendices discuss the meaning of the word canon, the priest-penitent relationship, and Byzantine legislation on homosexuality.

V. Rev. Fr. Dr. Vasile Mihai was born in Romania in 1952. After completing studies in Computer Science (1976) and Law (1984), he attended and graduated from Holy Cross Greek Orthodox School of Theology in 1999. He was ordained to the priesthood that summer and served at the Dormition of the Theotokos Greek Orthodox Church in Greensboro, NC until 2005. In 2006 he finished his D.Min at Pittsburgh THeological Seminary. With his wife Danielle, Father Mihai presently serves St. Paul's Greek Orthodox Church in Savannah, GA.

My First Book of Orthodox Words