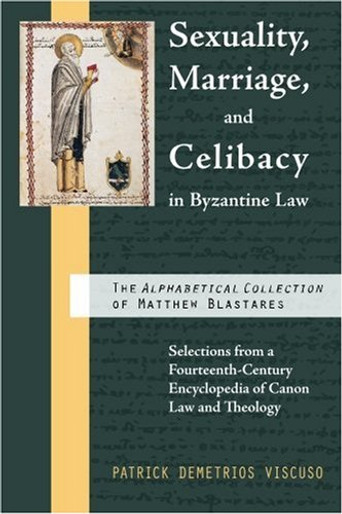 Matthew Blastares compiled the most important legal collection of the late Byzantine Empire, a collection that Orthodox ecclesiastical judges continued to use in the Ottoman Empire. The collection ranges from church law that any Christian might recognize to laws that seem bizarre to the modern eye (such as multiple restrictions on menstruating women) to those that retain their relevance for contemporary debates (such as those related to homosexuality). No English translation of significant portions of the work has existed before this publication by Patrick Viscuso.

The Rev. Dr. Patrick Viscuso is Professor of Canon Law at the Antiochian House of Studies, a past president of the Byzantine Studies Association of North America, and a specialist in Byzantine and Oriental canonical legislation.  His other works include books dealing with canon law, Byzantine history, and reform in the Orthodox Church.  His most recent articles focus on the relationship of marriage to ordination, purity issues, divorce, and women's superstitions in late Byzantium.  He is a member of the Orthodox Delegation to the North American Orthodox-Roman Catholic Theological Consultation.

The Law of God: For Study at Home and School

Services of Christmas, The