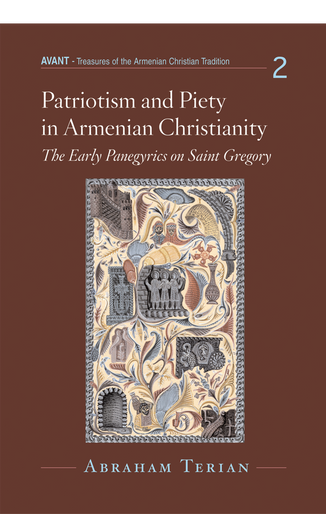 This fascinating volume launches the AVANT series -- a collaborative effort between St Nersess Armenian Seminary and St Vladimir's Seminary Press -- which will make available historical and spiritual treasures from the Armenian Christian tradition.

This particular volume recounts the blend of patriotism and piety that was born in the very cradle of Armenian Christianity. "Armenian letters," a literary motif that began in the fifth century and nurtured the mingling of culture and religion, reached its highest point in the medieval panegyrics of St Gregory the Illuminator -- fourth-century apostle, national saint, and patron of Armenia. Foremost among those who lauded St Gregory was Yovhannes Erznkats'i (ca. 1230-1293), who chose for the setting of his panegyric the summit of Mount Sepuh, where St Gregory spent the closing years of his life.

In his introduction, Abraham Terian lauds Erznkats'i and his other works; remarks upon the occasion for the panegyric as well as its text and structure; and describes the locale of Mount Sepuh. Terian's superb translation of Erznkats'i's panegyric and commentary are followed by selected odes and hymns to St Gregory, including one attributed to St John Chrysostom and one attributed to St John's disciple Theophilos. Anyone interested in the complex and intriguing marriage between faith and culture will enjoy this excellently written volume.