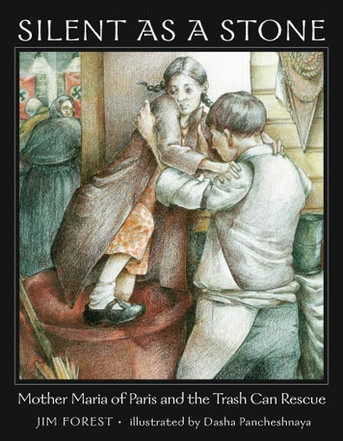 Silent as a Stone memorializes the life of Mother Maria Skobtsova, an unconventional nun who aided Jewish people in occupied France during WWII. Confronting the horror of Nazi brutality, Mother Maria devised an ingenious plan to save Jewish children destined for extermination camps: upon her urging, Paris garbage collectors hid children in trash cans and whisked them to safe havens outside the city.

For her courageous rescue activities, Mother Maria perished in a gas chamber in Ravensbrock concentration camp in Germany in 1945. Today, she is among the "righteous gentiles" honored in Israel and a canonized saint in the Orthodox Church.

About the Author: Jim Forest is secretary of the Orthodox Peace Fellowship and editor of its journal, In Communion. He is a recipient of the Peacemaker Award from Notre Dame University's Institute for International Peace Studies. He is a prolific writer of inspirational, historical, and biographical books, most recently of The Wormwood File: E-Mail from Hell. Silent as a Stone is his third children's book.

About the Illustrator: Dasha Pancheshnaya was born in Moscow, Russia and holds a BFA in Illustration from the Fashion Institute of Technology. Influenced by Russian artists of the nineteenth century, masters of the Italian Renaissance, and Art Nouveau, she currently is a student of the Prosopon School of Iconology.

Into the Silent Land: A Guide to the Christian Practice of Contemplation

Story of Mary the Mother of God, The [hardcover]