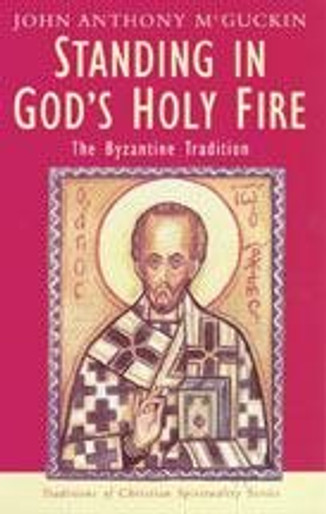 Standing in God's Holy Fire is a fascinating exploration of the spiritual roots of Orthodox Christianity. The Byzantine tradition--Christian culture that arose in the eastern part of the Roman Empire--fed the rise of Orthodoxy in the Greek and Slavic worlds. Today, thirst for authentic spirituality attracts new interest in the Byzantine tradition's taste for beauty, science of prayer, and emphasis on the quest for holiness.

This important series seeks to make the riches of selected Christian traditions available to a contemporary public. The books in the series offer excellent introduction to some of the major traditions showing the key themes and values of their spirituality. They also highlight the relevance of these themes and values to the experience of the modern day reader.

"In comparison to other religious, Christianity is not always associated in people's minds with spirituality. This is a great pity, for Christianity East and West over two thousand years has given birth to an immense range of spiritual wisdom. Today, when there is widespread hunger for spirituality in all its forms, is an opportune time for a new series which will help more people to be aware of the great riches available within the Christian tradition." -Philip Sheldrake, Series Editor

The Orthodox Byzantine tradition is still often undervalued and misunderstood in the Western churches, Standing in God's Holy Fire is a vivid introduction to the leading figures, key themes, and values of this living and ancient form of Christian spirituality, which has endured and survived a recent history of systematic persecution.

At the center of the Byzantine experience are ideas which western Christians share, and from which they still have much to learn: beauty, endurance, and hopefulness. "Perhaps," as John McGuckin writes, "the writings of the Byzantine saints are just now about to enjoy their greatest era of influence in a brave new world where the Church stands in deep need of consolidation, spiritual courage, and coherence."

John Anthony McGuckin is a priest of the Romanian Orthodox Church, Professor of Early Church History at Union Theological Seminary, New York City, and Adjunct Professor of Religion at Columbia University. He has written extensively on Early Christian thought and culture.