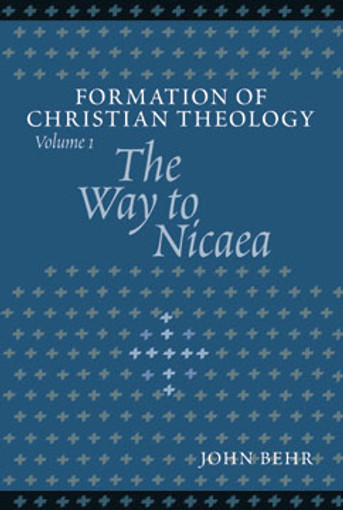 [The] uneasy relationship between Orthodoxy and critical theology is being transcended in some of our younger Orthodox theologians. The most striking, and hopeful, example is the work by John Behr. Professor Behr does not take refuge in easy answers and his Orthodoxy is radical not conservative ... This is, therefore, a demanding book, requiring of its readers careful attention: but such attention will be richly repaid. -- Andrew Louth, from the Foreword

This three-volume series traces the reflection provoked by Christ's question, "Who do you say that I am?" from the earliest days of Christianity to the Seventh Ecumenical Council. Through original and penetrating analyses of selected figures and controversies, author Fr John Behr presents not only the history of theological reflection, but a sustained analysis of the essential elements of the resulting theology.

This first volume treats the initial three centuries of the Christian era. Part I examines the establishment of normative Christianity on the basis of the tradition and canon of the Gospel and briefly sketches the portrait of the Scriptural Christ inscribed in the New Testament. Part II analyzes selected figures from the second century--Ignatius of Antioch, Justin Martyr and Irenaeus of Lyons--considering how they understood Christ to be the Word of God. Part III turns to the third century, treating Hippolytus and the debates in Rome, Origen and his legacy in Alexandria and Paul of Samosata and the Council of Antioch, in a continued examination of Christ as the Word and Son of God. These debates form the background for the controversies and Councils of the following centuries, to be examined in subsequent volumes.

About the Author: The Very Rev. Dr John Behr is former Dean and Professor of Patristics at St Vladimir’s Orthodox Theological Seminary. He is Editor of the Popular Patristics Series and the author of The Way to Nicaea, The Nicene Faith, The Mystery of Christ: Life in Death, and Becoming Human, all available from SVS Press.

Nicaea and Its Legacy

Way of a Pilgrim and the Pilgrim Continues His Way