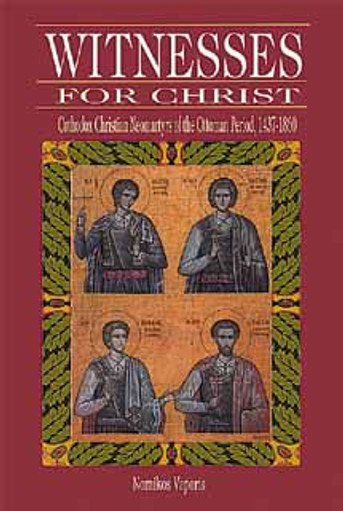 This study is the culmination of two decades of research on Orthodox neomartyrs under the Ottoman Turks. Fr Vaporis has compiled the life stories of almost two hundred faithful men and women who were by and large of humble station, possessing little or no formal education, yet gave their lives, or witnessed, for Christ. It is a pan-Orthodox study which cuts across ethnic boundaries to include many non-Greek neomartyrs, from countries such as Albania, Bulgaria, Romania, Serbia, Cyprus, Egypt, Ukraine, and Georgia. It also includes a number of accounts of Muslims who converted to Orthodox Christianity and suffered a martyr's death because they refused to return to Islam.

This, however, is not simply a collection of hagiographic stories. Here the lives are retold in a fluid, easy-to-read manner, and set in an historical context to make them more accessible to the reader. Also of great interest are the many translations of the dialogue between the neomartyrs and the Ottoman judges (kadi), during the three interrogations that were mandated by Islamic law. These records provide fascinating information on mutual perceptions and the clash between Orthodox and Islamic cultures, illustrating how the Ottomans became increasingly intolerant of Orthodox Christians as their empire declined.

While of great historical interest, this collection of accounts of Orthodox neomartyrs, who had to choose between conversion to Islam and painful torture and death, will no doubt inspire many readers in their own daily lives.

About the Author: Rev. Dr. Nomikos Michael Vaporis was an historian of Byzantine history and Modern Greek Hellenism, as well as the former Dean of Hellenic College/Holy Cross School of Theology, and director of Holy Cross Orthodox Press.

Words of Fire: The Early Epistles of St. Paul to the Thessalonians and the Galatians