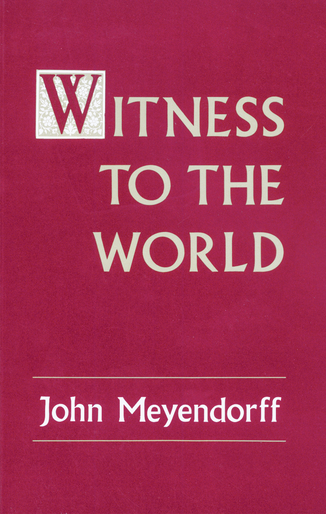 In his editorials, printed here in Witness to the World, there are three major themes that reflect Father Meyendorff's fundamental convictions concerning the mission of the Orthodox in the contemporary world. This book focuses on: 1) the principles of Orthodox participation in the ecumenical dialogue, with particular comments on the new overtures which followed Vatican II, and the unfortunate politizations of Protestant ecumenism; 2) the particular responsibilities of the Orthodox Church in the fields of education and mission; and 3) developments in Russia, where the Orthodox Church faces a state whose official ideology is atheism, but where millions remains faithful to the Church, attracting a model for today and a hope for the future.

Other related books published by St Vladimir's Seminary Press include: Church, World, Mission by Alexander Schmemann; The Russian Church Under the Soviet Regime 1917-1982 by Dimitry Pospielovsky; All the Fulness of God: Essays on Orthodoxy, Ecumenism and Modern Society by Thomas Hopko; and Vision of Unity, by John Meyendorff.