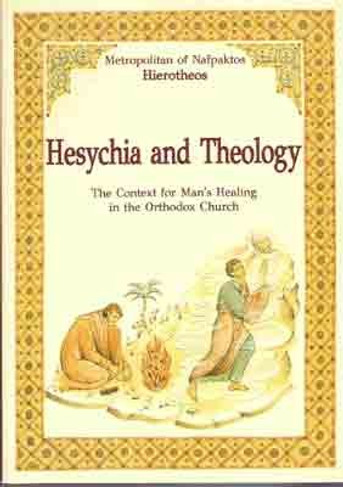 In this book, entitled “Hesychia and Theology” (The Context for Man’s Healing in the Orthodox Church), seventeen texts are published which make clear how indispensable for the knowledge of God is the hesychastic and neptic Tradition of the Church, as presented in the writings and teaching of the holy Fathers. Heyschia, as a method and means for healing man’s soul, is the way along which every Christian must inevitably pass to reach communion with God. The knowledge of God, in other words theology, is the fruit of hesychia, and constitutes man’s salvation.

The book is dedicated by the author to three recent Elders who “received, preserved and handed on the Sacred Tradition entrusted to them”, Father Paisios the Hagiorite, Father Porphyrios of Kavsokalyvia and Father Sophrony the Hesychast, who lived the Mystery of the Cross and Resurrection of Christ, and suffered, learnt and taught.

After the author’s preface, instead of an introduction, excerpts are quoted from the theology of Father John Romanides, referring to prayer and Orthodox theology.

We shall mention very briefly the subjects examined in the subsequent chapters.

1. Sanctity in the Orthodox Tradition. The basic preconditions and criteria for sanctity are identified, because not every ‘good’ person is a saint. The great importance of the presence of saints in the life of the Church is emphasised, since the Church’s purpose and task is the sanctification of its members.

2. The Covenant of God. Both the Old and New Covenants are directly linked with theology and hesychia, and contribute to man’s regeneration. In the Old Covenant there was communion with the unincarnate Word, whereas in the New Covenant there is communion with the incarnate Word. The “Personal Covenant” is referred to, which God makes with every believer who lives within the Church and strives by fulfilling His will to be united with Him.

4. The Neptic Theology of the Orthodox Church as a Method of Healing. Hesychia is a complete science relating to thoughts, the heart and the senses, and helps a person to be delivered from passions, to overcome death and be united with God. The context of Orthodox theology is defined. We are shown elements from the life and sayings of a person completely cured (Elder Porphyrios), who followed the hesychastic and neptic method of the Church in our own day, and is seen as representing the Orthodox Patristic Tradition.

5. The Sacrament of Repentance as the Church’s Therapeutic Praxis. The aim and work of repentance are directed towards man’s healing. We can read about the stages and levels of repentance. Attention is draw particularly to the therapeutic character of the sacred Canons of the Church, and how St Basil the Great dealt with penitents.

6. The Person of the Spiritual Father and the Gift of Discernment. Taking the person of the Spiritual Father as a starting point, the author stresses essential aspects of the meaning of ‘person-hypostasis’, a term which refers first and foremost to the Triune God, but by extension to man, principally to the deified man who receives the energies of the Holy Trinity. Consideration is also given to the fact that, in the Holy Scriptures as well as in patristic texts, the Word of God is portrayed both as Father and as mother, because through His obedience to the Father and His sacrifice, He brought men to new birth. There is a reference to the spiritual fatherhood and motherhood of the holy Apostles and the Fathers of the Church, and how they behaved towards their spiritual children. The point is made that man’s healing within the Church is not independent of the person of the Spiritual Father. There is a description of the necessary prerequisites for correct use of the sacred Canons so that they contribute to people’s healing and salvation. Attention is drawn to the gift of discernment, regarded as the gift which, above all others, should set the Spiritual Father apart, so that he can recognise what his fundamental task is.

7. Holy Scripture and Worship. We are shown evidence revealing the close relationship between Holy Scripture and worship in the Church. The New Testament in particular makes clear the connection, but also the distinction, between rational and noetic worship. Apart from sharing in created worship, Christians have the potential, through noetic prayer and depending on the extent of their purification, to experience uncreated worship, which is union and communion with God. Mention is made of “the sighs too deep for words” wrought by the Holy Spirit, that are the noetic worship through which a person attains to empirical knowledge of God, and of how such sighs relate to rational worship. The aim of Holy Scripture is to lead the believer to the Eucharistic gathering and the experience of worship.

9. From the Morning Watch until the Night. Using the verse from the psalm of David as a starting point, the author analyses the prayer composed by Elder Sophrony of blessed memory to be read in the morning after rising from sleep. The complete text of the prayer is included at the end of the chapter, and shows the very personal nature of man’s relationship with God. The whole prayer is full of inspiration and is marked by true repentance and profound self-accusation.

10 Spiritual Inspiration. An account is given of Elder Sophrony’s teaching about inspiration. A Christian ought to be possessed by the spirit of Christian inspiration, which proceeds from divine Grace and man’s co-operation, in order for his life to acquire content, high spiritual meaning and purpose. He should imitate the way an artist lives, and struggle to experience and retain spiritual inspiration, because this will help towards his complete transfiguration and rebirth.

11. The Path to Deification. As the theological lessons from the life of St Mary of Egypt are pointed out, we realise that it is possible for a person to be transformed by the energy of God’s grace, however bad the condition in which he finds himself. By his personal striving, which is mainly characterised by repentance, but above all through the power of God, he can attain to deification.

12. Nous and Perception according to St Diadochos of Photiki. An analysis is made of elements of the teaching of St Diadochos of Photiki contained in his work “One Hundred Texts on Spiritual Knowledge”, which are highly significant for man’s healing and his union with God. Consideration is given to what exactly the nous is, how it relates to reason and the senses, and how a person can acquire existential knowledge of God “with full and conscious perception”.

13 Ecumenism in Practice: in Theology and Asceticism. Various signs are identified which reveal that even today contemporary theologians have been influenced by Western theology; indeed they assert that the teaching of the Fathers of the Church was influenced by scholasticism and Neo-Platonism. There is a detailed exposition on the theme that, when we relegate the basic Orthodox teaching about purification, illumination and deification to the margin of ecclesiastical and personal life, we experience Protestant theology and asceticism in the Orthodox Church, and these cannot cure people.

14. Orthodox and Secularised Theology. By examining key points in the work of St Gregory of Nyssa entitled “The Life of Moses”, the author shows that Orthodox theology is the vision of God and has no connection with secular learning. The pre-conditions for experiencing it are also made clear. There is an explanation of what constitutes secularisation in theology, and what a secularised Christian is.

15. Monasticism according to St Eustathios of Thessaloniki. On the basis of the work of St Eustathios, Metropolitan of Thessaloniki, called “A Review of the Monastic Life with a View to Making Corrections in Respect of It”, attention is drawn to interesting details which thrown light on the exalted goal of the monastic life and its value. The process by which the monastic life becomes secularised is also underlined.

16 Hesychia and Theology. This chapter presents various aspects of the saintly life and inspired teachings of Elder Paisios, as set out in the book called “The Life of Elder Paisios the Hagiorite”. We see how a contemporary man, once he had made use of the Orthodox Church’s therapeutic method (ascetic practice, hesychia and prayer) and been healed, went on to attain empirical knowledge of God (theology), and by his words and his life communicated love and peace to God’s people, guiding them towards salvation.

17. The Hesychastic Elements of the Holy Eucharist. As the reader studies this chapter he will see for himself how closely the Divine Liturgy is connected with the hesychastic life of the Orthodox Tradition. The specifically hesychastic elements which a person encounters in the Divine Liturgy are identified, because the prayers in the holy Eucharist, both for the congregation and the clergy, about approaching it in a worthy manner, are full of hesychastic content. The Christian’s participation in the holy Eucharist should not stop at formal attendance, but should be linked with the inner noetic Liturgy, because in this way the believer will acquire a relationship and communion with God. It is emphasised that Holy Communion acts in accordance with the spiritual state of each Christian, in other words, it presupposes a hesychastic and neptic perspective on his part. The Holy Eucharist is a sharing in the Kingdom of God, but only on condition that we approach it with inner stillness and watchfulness.

The book “Hesychia and Theology” deals with a wide variety of subjects which demonstrate the depth of Orthodox ecclesiastical life.

Illness and Healing in Orthodox Theology

Illness and Cure of the Soul in the Orthodox Tradition

I Know a Man in Christ: Elder Sophrony the Hesychast and Theologian