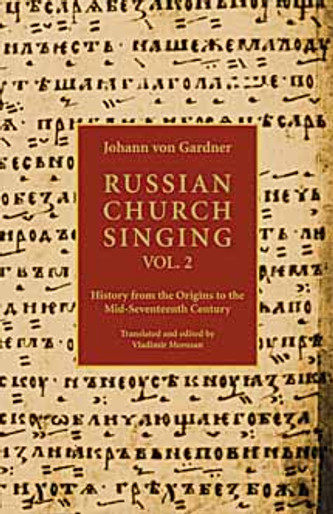 The history of church singing in Russia constitutes an essential aspect of this nation's cultural and musical history. For the first 650 years, from the Christianization of Rus' in the year 988, liturgical chant was the only documentable art music in that vast territory that eventually became the modern nations of Russia, Ukraine, and Belarus. Indeed in Russia before the revolution in 1917, "liturgical musicology" was a bona fide scholarly discipline, taught in conservatories, universities, and theological seminaries. All activity in the field came to a halt, however, during the 75-year "Soviet era," when the study and practice of sacred music was severely repressed for ideological reasons, with a resulting lack of published research and secondary material. Consequently, Russian and Western music historians, church musicians, and liturgical scholars (as well as ordinary church-goers), whose interest in Orthodox Christianity and its art has been increasing of late, have been deprived of reference works that would impart even a general knowledge of the history and development of liturgical singing in the Russian Orthodox Church.

The present volume, Russian Church Singing: Volume 2is the second installment of Professor Johann von Gardner's monumental work to appear in English translation. The 396-page volume, translated and edited by Dr. Vladimir Morosan, considers the development and practice of liturgical chant in the Russian lands from a variety of aspects: its origins and the various cultural influences upon its formation; extant manuscripts; the evolution of the notation and the problematics of deciphering it into modern-day notes; the forces involved in its performance; its stylistic evolution from exclusively monadic forms to improvised and, eventually, notated polyphony; its earliest known composers and performing ensembles; its aesthetics in relation to liturgy, the language, and the various problems that arose over the centuries, resulting in the adoption of Westernized stylistic models around the year 1650, which marks the approximate end of the time period covered in this volume. Much of this information is made accessible for the first time to the English reader, and will be of interest both to the specialist and to the general reader, generating a healthy demand for further research and exploration into this fascinating and hitherto unknown field.

St Vladimir's Seminary Press publishes a wide selection of books on Orthodox theology, worship, history, spirituality and art. These include such works as Theology of the Icon by Leonid Ouspensky, an illustrated exploration of the Orthodox understanding of the icon; Introduction to Liturgical Theology by Alexander Schmemann, which studies the ordo or "shape" of Orthodox worship and its historical evolution from its beginnings down to the Byzantine synthesis of the ninth through twelfth centuries; Nicholas Cabasilas' Commentary on the Divine Liturgy, a classic expression of Byzantium's last great flowering of theology; and The Russians and Their Church by Nicholas Zernov, a popular survey of the entire scope of Russian Church history. All four books provide further insights into the life and thought of the Orthodox Church.