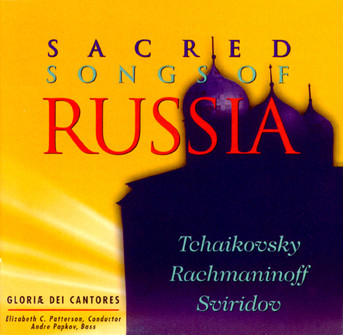 Over the past thousand years, Russian composers have created an immensely rich and varied body of choral music and chant to express the sacred texts of the liturgy. Sacred Songs of Russia portrays the musical legacy of the Russian people, which comes as a response to the depth of their faith. Among the noteworthy works on this recording, which contains previously released material, are two stirring works by Rachmaninoff including Bogoroditse Devo (Rejoice, O Virgin) from his All Night Vigil, opus 37, and V molitvah (The Mother of God, ever-vigilant in prayer). Perhaps most significant are the Three Choruses of Georgy Sviridov (1915-1998), composed during a time when sacred music was still actively suppressed by the Soviet regime. The three works by Peter Tchaikovsky, Milost' mira (A Mercy of Peace), Angel Vopiyashe (The Angel cried), and Hymn in Honor of SS. Cyril and Methodius, are also strong statements of the Russian faith and expression through music.

Gloriæ Dei Cantores first toured Russia (then part of the U.S.S.R.) in the spring of 1990, to re-introduce Russian sacred choral music to their concert halls for the first time since the Russian Revolution of 1917, and participated in several liturgies of the Russian Orthodox Church. At the request of Metropolitan Alexy of Leningrad, now Patriarch of Moscow and all Russia, Gloriæ Dei Cantores toured Russia a total of three times, returning in 1992 and 1998 to sing in Moscow, St. Petersburg, and throughout the Golden Ring.Gloriæ Dei Cantores were also among the first Western artistic groups to tour Siberia.

Sacred Gift of Life, The