The Eastern Orthodox Church in the Spiritual Marketplace 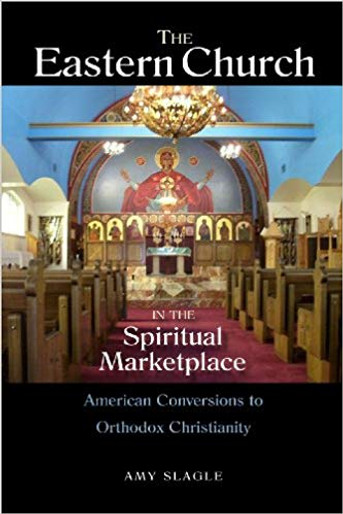 The Eastern Orthodox Church in the Spiritual Marketplace

The Eastern Orthodox converts in this study are participants in what scholars today refer to as the “spiritual marketplace” or quest culture of expanding religious diversity and individual choice-making that marks the post-World War II American religious landscape. In this highly readable ethnographic study, Slagle explores the ways in which converts, clerics, and lifelong church members use marketplace metaphors in describing and enacting their religious lives. Slagle conducted participant observation and formal semi-structured interviews in Orthodox churches in Pittsburgh, PA—the “Holy Land” of North American Orthodoxy—and Jackson, MS, in the Bible Belt—where the Orthodox Church in America has marshaled significant resources to build mission parishes.

“Slagle’s study is an important contribution to several fields. It adds significantly to the treatment of conversion in the sociology of religion, which has tended to focus mainly on Protestantism and secondarily on Catholicism. The book is extraordinarily well written and organized, combining data and theory with an ease seldom found in academic prose.” —Andrew Buckser, Professor of Anthropology at Purdue University and co-editor of The Anthropology of Religious Conversion

“This is a fascinating collective biography of American spiritual seekers. Slagle’s study simultaneously broaches issues of personal identity, ethnicity in religion, what it means to be American, and the conflicting roles that race might play in the process of conversion to Orthodox Christianity in twenty-first century America.” —Roy R. Robson, Professor of History and Director of the Honors Program at University of the Sciences in Philadelphia

"Amy Slagle's monograph represents the first substantial ethnographic study [on] Eastern Orthodox Christians in America. She focuses on converts to Orthodoxy, presenting a compelling argument that, far from rejecting modernity and the spiritual marketplace in favor of tradition, converts operate precisely within the 'culture of choice' environment." –Scott M. Kenworthy, Church History

“Amy Slagle’s new ethnographic study on the dynamics of conversion to the Orthodox Church in the so-called spiritual marketplace is a welcome contribution illuminating the historian, sociologist, pastor, and theologian.” —Nicholas E. Denysenko, Journal of the American Academy of Religion

Amy Slagle is an Assistant Professor in the Department of Philosophy and Religion at the University of Southern Mississippi.

For the Life of the World (Hardcover)