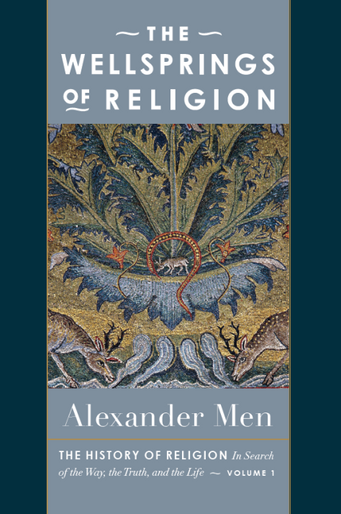 "I was immediately struck by the modern relevance of this work. Men was writing during the heyday of Soviet Communism, when religion—the Christian faith in particular—was under attack. In our increasingly secularized western society, the same line is peddled by so-called 'New Atheists,' fostered by the media, pandered to by politicians, and bolstered by misconceived notions of political correctness. Forceful and respected counter-voices are needed. This book is a welcome contribution to the defense of faith and reason—particularly the compatibility of science and Christian belief." —William Clegg
Professor Emeritus, University of Newcastle, UK

Fr Alexander Men faced specific challenges to faith in the Soviet Union, but the questions he raises and answers in this volume resonate on a universal level: Does religion belong only to the past? How is religion related to culture? What is faith? How is religion related to science? The Wellsprings of Religion brings Fr Alexander Men's voracious curiosity to bear on the issues of our day, as he seeks to bring Orthodox faith into dialogue with the world at large.

This volume is the first in Fr Alexander Men's magnum opus, The History of Religion: In Search of the Way, the Truth, and the Life. In the author's words, "The aim of the work is to sketch out, in an accessible way, the drama of spiritual history...in the light of a holistic Christian worldview...and so the series as a whole can be seen as an attempt at a synthesis of religion, philosophy, and history...[that will] help readers see in the history of religion, not a host of delusions, but streams flowing and carried onwards, as in rivers and brooks, into the ocean of the New Testament."

FR ALEXANDER MEN (1935-1990) was an Orthodox priest, theologian, and biblical scholar. He was a missionary to his own people, and founded the Orthodox Open University and the Russian Bible Society. He was murdered in 1990, just before the fall of the Soviet Union. Most of his works were published in Russia only after his death.