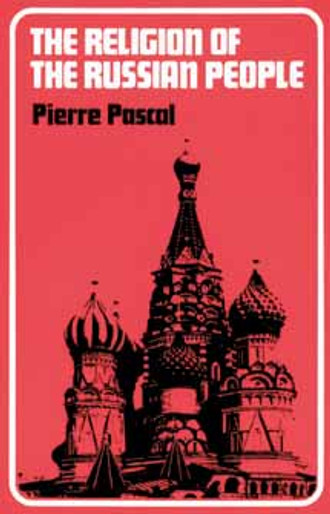 Russia has long exercised a special fascination for people in the West, which has been increased recently by the publicity given to the dissent of its leading intellectuals. Western Christians, tortured by self-doubt and an agonizing revaluation of all their values, are now hearing new and strange voices from Russian that bear testimony to the strength of the Christian faith there. More than ever before it is necessary to explore the hidden strengths of the religion of the Russian people.

This translation of the work of Pierre Pascal, well-known French expert on Russian history and culture, provides a lively study of Russian popular religion in the period of the great nineteenth-century novels, the last days of the Empire and the advent of the Revolution. Richly documented with illustrations drawn from history, literature and the author's personal experiences in Russia, the book includes the complete text of an important medieval work, "The Pilgrimage of the Mother of God among the Torments of Hell."

Professor Pascal explores the Russian people's deep attachment to ritual and tradition, their conviction that innocent suffering is a pledge of salvation. In so doing, he suggests why, despite the official triumph of Marxism sixty years ago, Christianity continues to be a living and vital force in Russia.

Other fine books on Christianity in Russia from St Vladimir's Seminary Press include Russian Piety by Nicholas Arseniev, Saint Sergius and Russian Spirituality by Pierre Kovalevsky, Saint Seraphim of Sarov by Valentine Zander, and Russian Letters of Direction by Macarius, Staretz of Optino. All four books provide insights into the religion of the Russian people.