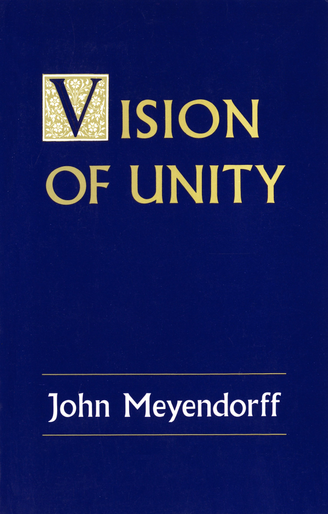 John Meyendorff, in his own words, has dedicated most of this life to teaching and to investigating the past of Christianity, studying the ways in which the faith of the Church was confessed throughout the ages by the Fathers of the Church.

It was during a more recent period--from January 1965 to December 1984--that he was also editor of a church monthly, The Orthodox Church, in which he published signed editorials reflecting upon the growth and development of the Orthodox Church in America. For him, this work was a blessed challenge. Indeed, he was forced to relate the permanent and unchanging faith of the Church to the changing circumstances of our recent history, and to the birth of a new Orthodox Church on the American continent.

The editorials reprinted in Vision of Unity ask the question: Can we survive in chaos and disunity? They are presented into two sections: 1) the issue of Orthodox unity in America, and 2) the basic principles of the Church structure. Throughout, the Church is revealed as a "conciliar" Church, the Church of all people, clergy, laity, old and young, men and women--the "Catholic" Church, of all nations and generations.

Other books by John Meyendorff published by St Vladimir's Seminary Press include:Living Tradition, Catholicity and the Church, Christ in Eastern Christian Thought, and the companion volume to this book, Witness to the World.

The Silver Series, Volume 5: On the Unity of the Church