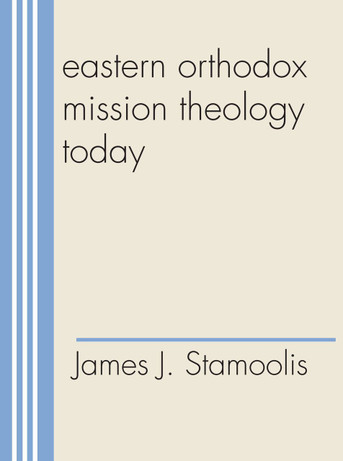 Stamoolis is probably the first author to deal exclusively with the Eastern Orthodox Church's beliefs regarding mission and evangelism. Tracing her roots all the way back to the day of Pentecost, the Holy Orthodox Church has historically been a missionary Church, fulfilling the Great Commission given by our Lord to "make disciples of all nations." (Matt. 28:19) Her missionary endeavors can be seen in the pages of the Book of Acts, as well as throughout history in the untiring efforts of such holy evangelists as St. Innocent, missionary to North America, and Sts. Cyril and Methodius, both missionaries to the Slavs. However, the Orthodox Church has not always been able to fulfill the Great Commission because of the persecution she has faced. In the 20th century, Orthodox Christians have endured widespread persecution at the hands of Communism (in Russia and Romania) and Islam (in the Middle East, Africa, and parts of Asia). Therefore, many Orthodox immigrants to America have lost their missionary zeal and see as their primary goal to preserve their heritage, but lack the desire to share their faith with others. The goal of the author is to shatter the myth that the Orthodox Church is not evangelistic, and to explain how the theological differences between Eastern Orthodoxy and Western Christianity determine how they view missiology differently. He does a wonderful job of explaining Orthodox mission theology as well as giving a good historical background of Orthodox missionary work to show how this theology has developed. He also talks about the current missionary work being done by the Orthodox in Africa as well as the "Diaspora" in America.

James J. Stamoolis, born of Greek immigrant parents, has had a lifelong interest in the Orthodox Church. With his wife, Evelyn, he served as a missionary in South Africa. James Stamoolis holds a doctorate in theology from the University of Stellenbosch, South Africa and has taught in theological colleges in southern Africa. He spent 15 years in interdenominational student ministry, including 8 years as the Theological Secretary of the International Fellowship of Evangelical Students. He was a Graduate Academic Dean at Wheaton College, Wheaton, Illinois for 9 years. Having served as Executive Director of the Theological Commission of the WOrld Evangelical Fellowship, he is currently the North American Director of the Caspari Center for Biblical and Jewish Studies. Dr. Stamoolis continues to be an educational and ministry consultant to several organizations.

Drinking from the Hidden Fountain: A Patristic Breviary