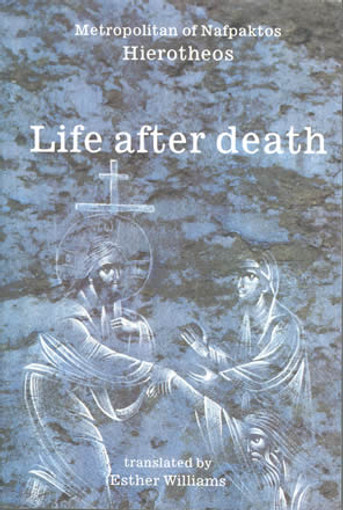 Life and Death confronts some of the questions which concern people today, such as what is death, what is the soul, what happens when the soul leaves the body, where the soul goes after its separation from the body, whether a man's being dissolves at death, what is the purifying fire, what are Paradise and Hell, what will happen at the Second Coming of Christ, and so on.

It has been widely observed that great interest is being shown today in the life after death. People are intensely occupied with the mystery of death. Naturally this is connected with the so-called existential questions arising in everyone, especially in the young. They are such questions as: What am I, what is the meaning of life, where am I going after I die, is there life after the soul leaves the body, and so forth.

Of course, not only our contemporaries but, in general, people of all times and races have been concerned with these questions. Philosophers are characteristically concerned with the origin of life, the existence of the soul, the entrance of evil into the world, and death. Thus while these topics appear to be contemporary, they have always occupied man's spirit.

If we observe an increasing interest today, it is due more to the insecurity which people are feeling now. For when all the certainties are being demolished and people feel discouraged by various events, it is natural that their interest in existential questions is intensified.

The Church has always confronted such questions, especially the most fundamental problem and the greatest mystery, the mystery of death. Indeed the aim of the incarnation of Christ was to conquer the power of death and the devil. Christ's victory over death gave man the possibility that he too could conquer death within his personal life. This is achieved in the Church.

When the Church speaks of death, it is not in order to frighten the people and create panic, but to help them to overcome it. Obviously the problem of death is not easy to face in any case, nor is death a simple event. We are born corruptible and mortal. At his birth the particular person is born who is going to die. All human life is a succession of deaths. The illnesses and general corruptibility of the body indicate that we are bearing the burden of death. And our various negative reactions go back to the experience of death. So when the Church speaks of these matters it is an effective help. In place of fear and panic it spreads hope and consolation. In this way it gives joy to life.

What is said in this book is inspired by the teaching of divine Revelation as it has been manifested to the saints of each epoch and recorded both in Holy Scripture and in the lives and teachings of the holy Fathers, who themselves are bearers of the divine Revelation.

Life and Death examines topics which move from the soul's departure to the life after the Second Coming of Christ. This is a difficult "area”because it moves within a mystery. There are many things which we do not know; not everything is easy to interpret. We know only what Christ and the saints have revealed to us.

The Church, which is the risen Body of Christ, is the place where we experience His triumphal victory over death and where we already share, as a foretaste, the Kingdom of God. It is the prayer of all of us that we may live in the Church exactly as Christ wishes, Who is its Head, so that we may attain experiences of eternal life. In that case there will be no need for intellectual analyses and logical understanding of these eschatological topics. We shall be living a diachronic eschatology.

—Metropolitan Hierotheos, from the Introduction

Illness and Cure of the Soul in the Orthodox Tradition

Light of All Nations: Essays on the Church in New Testament Research