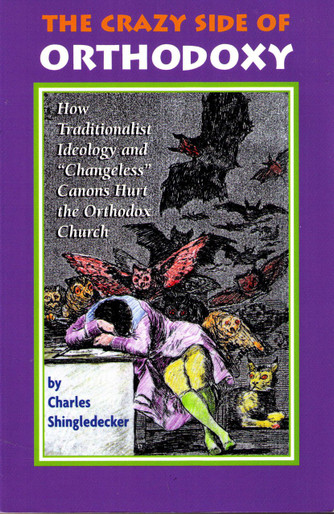 The Crazy Side of Orthodoxy is an amusing yet poignant critique of the so-called Traditionalist Movement. It examines this modern day phenomenon by looking at the more outlandish Canons that traditionalists insist all Orthodox Christians embrace. Many of these supposedly changeless laws- from priests having even longer beards to saying that all the Canons are "divinely inspired"- are silly or even barbaric.

The Orthodox Traditionalist Movement impacts the Orthodox Church negatively because it calls for a "return" to all the traditions of the ancient church, since today they are rarely enforced. But what are those traditions? Did you know that they include forbidding the Orthodox to dance at weddings? From having a Jewish doctor? They also include punishing a woman for having a miscarriage! Believe it or not, these "inspired" Canons even include laws which declare that eating Matzoh bread is evil!

The Crazy Side of Orthodoxy presents a compassionate view of authentic Christian faith, which rests on teh teachings of Jesus. It also provides a much needed rebuke to the destructive forms of traditionalism that some Orthodox are pushing, and provides a timely warning. As the author says- just because something is old, doesn't mean it's Christian.

Charles P. Shingledecker is a member of the Wisconsin Regional Writers community. Charles was raised Roman Catholic and joined the Greek Orthodox Church in 2003. He is a tonsured lay reader in his parish.

How Our Departed Ones Live: The Experience of the Orthodox Church