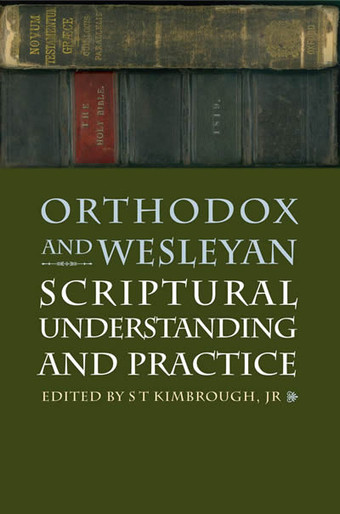 These essays from the "Second Consultation on Orthodox and Wesleyan Spirituality" address scriptural authority and interpretation in the Orthodox and Wesleyan traditions. Rooted within their respective faith communities, the authors avoid false convergences but acknowledge viable commonalities, thus setting an innovative tone for ecumenical study and dialogue.

The four main sections--Orthodox Scriptural Understanding and Practice, Mutual Learning between Orthodox and Methodists, Wesleyan Scriptural Understanding and Practice, and Liturgy and Scriptural Interpretation--represent selected presentations from the "Second Consultation on Orthodox and Wesleyan Spirituality" held at Trinity College, June 16-20, 2000, in Bristol, UK, and from the "Third Consultation" convened at the Orthodox Spiritual Academy in Crete, Greece, August 1-7, 2002, under the sponsorship of the General Board of Global Ministries of The United Methodist Church and the faculty of St Vladimir's Orthodox Theological Seminary.