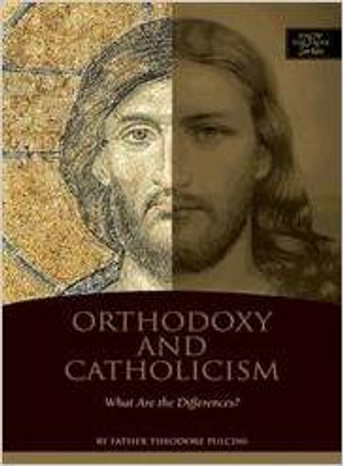 "Orthodoxy and Catholicism- they're both pretty much the same. Right?"

Well, as a matter of fact, though they share many similarities and a common heritage, there are significant differences between these two religious bodies. These differences have been the cause of great confusion on the part of members from both confessions, not to mention those looking on from Protestant or non-traditional backgrounds.

In Orthodoxy and Catholicism, a former Roman Catholic chronicles his own journey to the Orthodox Faith, and examines the critical issues that influenced his decision. These issues include papal authority, the filioque controversy, and the "new" dogmas of the Catholic Church.

Written in a thoughtful, non-confrontational style, Orthodoxy and Catholicism describes the basic differences, providing a clear apologetic from the Orthodox perspective.

Fr. Theodore Pulcini studied at Holy Cross Greek Orthodox Seminary and did his master's and doctoral work at the University of NOtre Dame, the Catholic University of America, Harvard, and the University of Pittsburgh. He was ordained to the diaconate in 1983 and to the priesthood in 1984 for service to the Antiochian Orthodox Christian Archdiocese of North America. In 1995 he taught as visiting faculty at St. Vladimir's Orthodox Theological Seminary and is on the faculty of Dickinson College in Carlisle, Pennsylvania, where he teaches in the Department of Religion. He is pastor of St. Mary Antiochian Orthodox Church in CHambersburg, Pennsylvania.