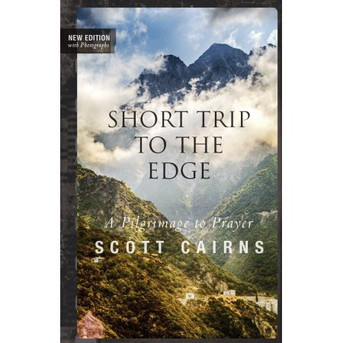 Poet and literature professor Scott Cairns ran headlong into his midlife crisis — a fairly common experience among men nearing the age of fifty—while walking on the beach with his Labrador. His was not a desperate attempt to recapture youth, filled with sports cars and younger women. Instead, Cairns realized his spiritual life was advancing at a snail's pace and time was running out. Midlife crisis for this this Baptist turned Eastern Orthodox manifested as a desperate need to seek out prayer.

Originally published in 2007, this new edition of Short Trip to the Edge include photos, maps and an expanded narrative of Scott's spiritual journey to the mystical peninsula of Mt. Athos. With twenty monasteries and thirteen sketes scattered across its sloping terrain, the Holy Mountain was the perfect place for Scott to seek out a prayer father and discover the stillness of the true prayer life. Told with wit and exquisite prose, his narrative takes the reader from a beach in Virginia to the most holy Orthodox monasteries in the world to a monastery in Arizona and back again as Scott struggles to find his prayer path. Along the way, Cairns forged relationships with monks, priests, and fellow pilgrims.

The Jesus Prayer: The Ancient Desert Prayer that Tunes the Heart

My Book of Prayers - Prayers and Commemorations for Home and Church

Services of Christmas, The